The iPad Air 4 (2020)’s screen, charging and performance make it one of the best iPads ever, as it’s essentially a more affordable iPad Pro. The only differences are that the iPad Air is oh-so-slightly thicker (6.1mm vs 5.9mm), it only has a single camera, and it comes in more colours. The display measures 10.9 inches across and it’s a Liquid Retina display, Resolution is an entirely adequate 2,360 x 1,640 pixels which means razor-sharp visuals. The iPad Air delivers cinematic vividness, detail and deep contrast to a screen that fits in your hands. So it’s a great device for watching movies on the go. If you have some movies on 4K Blu-ray discs and want to put them on the tablet for amusement on the go, you’re in the right place. Here we will show you how to easily and quickly rip and convert 4K Blu-ray to iPad Air 2020 for playback.

If you’re a Mac user, simply turn to Acrok Video Converter Ultimate for Mac, which has the same function as the Windows version. Now download the right version and follow the tips below to finish 4K Blu-ray to iPad Air supported video format covnersion task.

This quick start guide takes iPad Air Blu-ray Ripper Windows version (Including Windows 11) screenshots as an example. The method to convert Blu-ray movies to the iPad Air on macOS 12 is the same. All that you should take care is to download the right version according to your situation.

Insert your 4K Blu-ray disc into your Blu-ray drive on your computer. Then click the Load Disc to import the Blu-ray movies to the best Blu-ray ripper software. You can also load Blu-ray folder, Blu-ray ISO files into the program. If you like, you can add your downloaded MKV, MOV, MP4, H.265/HEVC movies into this software.

Next, select a proper output video format. this Blu-ray to iPad Air converter provides the optimized preset for Apple devices so you don’t need to be bothered by what format to set as the output file format. By choosing iPad H.264 Video or iPad Air Video, you’ll convert your 4K Blu-ray movies to videos with optimized settings to fit the iPad Air 2020. 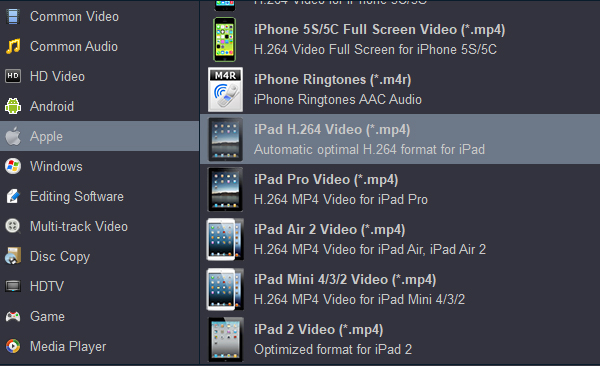 After all necessary settings, simply click the Convert button to start converting the added Blu-ray files to H.264 MP4 videos. Wait for the conversion to complete and click Open button to get the converted videos instantly. The next step is to sync these movies to your iPad Air.

After ripping 4K Blu-ray to iPad Air compatible video format, it is time to put movie from computer into iPad Air. iTunes is the first tool most users can think of.

Step 2. Connect your iPad Air to computer, and it will be detected by iTunes automatically.

Click your iPad Air icon, navigate to “Movies” under “Settings” section > Tick “Sync Movies” > Checkmark “Remove and Sync” in the pop-up window > Select the movies that you want to copy to iPad Air and “Apply” > “Sync and Replace” to start to move movies from computer to iPad Air.

Now you’ve learned how to convert the 4K Bluu-ray to a format supported by your iPad Air, and how to transfer the converted video to your iPad Air. Just enjoy your movies!

You may also need to read: